From the artist that brought us the uplifting “The Power”, encouraging “Victory” and showed his freestyle skills on Wiz Khalifa’s “Black and Yellow” instrumental; comes a new single “Kiling me” produced by award wining producer Kid Konnect. “Killing me”, featuring Mugez (R2Bees) and Teeklef, is a sweet departure for X.O – and one, finally, just for the ladies. This is the first single released from X.O’s anticipated EP “X point O”. X.O. Senavoe, who came in the game last year with “Taxi music” on a Rick Ross instrumental, has been hailed as one of the top ten rappers in Africa. He has featured with many artists, the latest being rapper Beazy on “bad guy” remix. “Xpointo” – X.O’s debut EP which is barely a mixtape as it comprises of mostly original work drops soon.


I am definitely feeling this record. 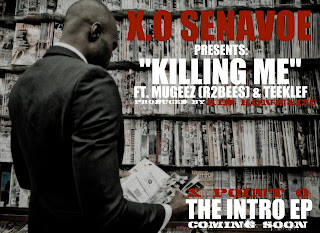