Music: Joey Plus – E No Matta 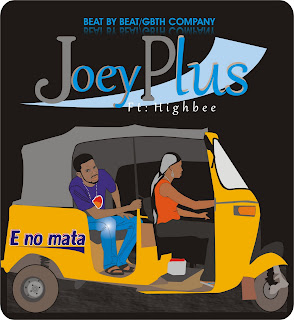 Joey Plus was one of the producers who mentored the band in the Nigerian Breweries sponsored Talent Hunt Show, Star Quest. The talent hunt was indeed a parade of tested producers including Samklef [Producer for Wizkid’s Don’t Dull] and Phat E [J’odie’s Kuchi kuchi baby]. Joey Plus mentored the winning band at this year’s Star Quest talent hunt, B.E.A.T.
Before Star Quest, Joey Plus born Joseph Eferurhobo mentored under Willie Oputa – a Producer/DJ with legendary Tuface Idibia engineered tracks for the like of Blackfaze [Plantashun Boiz], Krazy Kulture et al and release his first single, ‘No time’ featuring Dampte of Wine your tinkolo featuring YQ fame.The Producer/singer revamped his recording career as he launches the #Joeytunesday new music giveaway every tuesday via his Twitter account: @JoeyPlus weeks ago.  He produced tracks for several upcoming artistes including the Krazy Kulture duo of ‘jupa’ fame. 2007, A group – Skoolboi was birthed with Joey Plus, Dampte (of ‘wine your tinkolo’ fame) and two other friends. A mixtape titled ‘Chronicles From The yard’ was released in 2010 featuring emerging acts like Laura Ikeji, Shorty Ace, Ill breeze et al. Joey Plus is pursuing a solo career doing pop and dance music with the release of his debut single – ‘No Time’ featuring Dampte. ‘No Time’ has been receiving rave reviews and becoming a favorite with fans.
Enjoy new sounds.
Don X