As part of the exclusive #SpoilFriday hot new single from Timi
After taking a six year break from music to complete medical school, Dr Timi Akinmuda aka Timi Dablackone made a successful return last year with the release of two singles: the insightful  ‘where you dey’ and the tongue in cheek ‘yansh police’  that had ipods and car decks alike abuzz.
Coming on the heels of that showing and to further sustain momentum gained, the ex Trybe Member drops his new single: ‘Spoil’. Produced by budding beatsmith H-code and featuring sensation in the making Tasty, Spoil is an embrace of the excesses of nightlife and makes for the perfect soundtrack to a night of revelry.
Timi before his hiatus was a key member of D’trybe collective headed by eLdee the don and made famous by their feel good hit of the early 2ks ‘Oya’. Currently he co-runs Phruntlyne Entertainment alongside Fola Fayanjuola  and  is working on his sophomore album project to be released  soon.
Enjoy new sounds.
DX 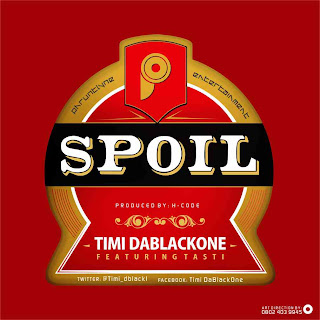