I got news via a few comedian friends of mine of this tragedy.

“Multiple sources are connfirming to us, that fan-favourite CD John, who emerged last year as one of the most promoising acts in Nigeria’s stand-up comedy industry, is dead.

The young cracker, who became a regular performer at almost every gig/ concert since late 2010 when major promoters and critics first noticed him. He was on his way back from Industry Nite when he crashed his car and ended up at St Nicholas Hospital in Lagos island.

‘He was the MC at Harrysong’s album listening party which held at Tribeca’, a source tells us. ‘He was driving back to the mainland, heading to his home at Jakande estate, Isolo when the accident happened’.

Cd John will mostly be remembered for his funny Christian choruses – a unique style where he messes around with the lyrics of popular songs; presenting his own account of how different Nigerian tribes would deliver the lyrics. With a superb voice, growing repertoire and audience control; he was set to become a big player in the competitive stand-up comedy scene. Until death put a stop to all that promise.” – Effiong Eton

Check out a few clips of CD John. May his soul rest in peace. 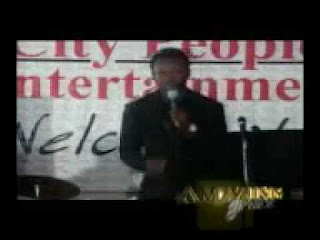