Igbo music is definitely not coming last this year… Enjoy

This is a contest where hiphop artists get to win a free single released under dunkishrock productions.
It’s simple every weekend, he’ll post a beat on twitter or facebook that artists can download & record on it
Then they post the finished product on Soundcloud and share it on the facebook fan page
The best artist gets officially released and promoted by dunkishrock productions (holla at him @dunkishrock)


Here is this week’s beat 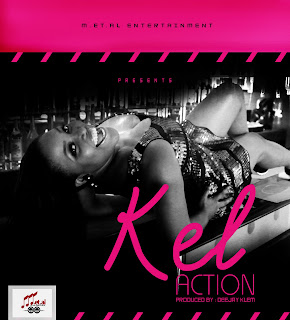 Now independent. Kelechi Ohia a.k.a KEL is currently working on new singles for her sophomore album.
Here’s something she recorded recently in one of her many sessions with the talented Deejay Klem,
it’s titled ‘ACTION’ and is a totally different sound that we are used to hearing from the femcee.

Following suit in the following weeks, will be her new singles, till then….enjoy! (Sic)

I hear a bit of the “Party Hard” funky house trend of music that Nigeria seems to have embraced. Not sure if she pulled it off in its entirety but question is what do you think?


Sirdam was born and raised in Jos Plateau State Nigeria. Igbo by
tribe.He Started singing and rapping right from his secondary school
days at St. Joseph College Vom, in Plateau State.
He has three Singles to his Debut and collaboration. His
contribution to the on going Peace process in Jos was an Instant Hit
single “Jos Peace Tribute Song” dedicated to all those that were
affected either directly or indirectly to the Jos crisis, and it is
enjoying massive airplay in Media houses around the Nation.He is
currently not signed but floats his own entertainment body WUD
ENT.(Where U Dey Entertainment). Expecting more single soonest. (sic)


This issue sort of hits close to home as I personally spent a year in Jos during my secondary school days.
So I’m posting this per sentimental ties.

Commonly called “The Well Fed Comedian,” the ridiculously hilarious entertainer Jedi was born in the late 1970s on the 30th of October to a family of 3 children of which he is the second. He Studied Microbiology at the Lagos State University but had the ‘gene’ of entertainment in his blood. It wasn’t until 1991 he discovered another part of being a comedian. He was given the opportunity to M.C at a University concert and it turned out to be a huge success. From there he handled a comedy segment that lasted for two years with Ayo Makinde & Dele Agadumo a.k.a Christol on Eko 89.75 FM on the program “Make it happen”.
Jedi has been on demand at various shows around the world and has performed at the following events: Ali Baba live, Unleash d’ Comedy with Basorge Taria, Gbenga Adeyinka n’ Friends, Crack ya ribs with Julius Agwu-london(1, 2 & 3), live ‘n Naked with Tee A(lagos, Abuja & london), Harps ‘n Psalms with Okey Bakassi, Crazy Comedy with Owen Gee, Shades of Comedy with Princess, Holy Laughter with Holy Mallam, Laffs ‘n jamz With Basket Mouth, ‘2nd Term’ with Teju Babyface, Made in Warri with RMD (Lagos, Abuja & London), Rhythm Unplugged (Port Harcourt, Abuja & Lagos), Out of Africa with Sammy Okposo (London), The Future Awards, Nigerian Entertainment Awards-New York (2008), World Aids Day Celebration-Bayelsa State Government( 2007 & 2008) and with the First Lady of Lagos State for the Lagos Empowerment And Research Network (L.E.A.R.N) program for the youths.
Jedi has evolved over the years not just as comedian and an MC but he has a unique dimension to him that separates him from his peers and that is his dedication and passion to the things of God. He is an entertainer but he has surrendered his vision to the plan and purpose of God. He is a man that has been blessed with many talents and has not limited his capabilities. He was the first Nigerian to perform on stage at the Carlin Academy in U.K. He also has a heart for mentoring up-coming comedians, thus he organized a professional seminar for those who have decided to take up a career in the entertainment industry. The seminar featured speakers like Fela Durotoye, Mr Akinyemi Akinwuntan, Ali Baba, and Dom Lawson.
Jedi has been nominated for the Best Up-Coming Comedian National Comedy Awards 2006, Best Comedian of the year for the Dynamix Awards 2006, 2007 & 2008, and Best Comedian of the year for Nigeria Entertainment Award 2008. He has received numerous honorary awards such as the Award for Excellence-Lagos State University, Rare Gem Award-Sickle Cell Initiative, and TitbitzNews Celebrity Recognition Award, to name a few. In 2007 Jedi embarked on his first solo album (G-Pikin Project), and after two years the exceptional album was released in July of 2009. Fans have referred to his songs as “feel good music” others have called it “Gospel with an inspirational vibe.”
Jedi is a brand of relevance to any and every crowd, his ability to make people laugh and his adaptability to every environment is impeccable. These qualities are what has made Jedi the multi faceted artist that he is today, and would carry him into his future achievement.
Enjoy his new single “LasGidi Boy” ..leave your thoughts about it.