M.anifest born and raised in Accra, Ghana, is a charismatic Hip-Hop artist voted City Pages Songwriter of the year after his critically acclaimed 2007 debut “manifestations.” He has been described as an artist with “an incredible gift” (the run off groove) who possesses “the kind of assured, joyful, ruminative voice that made Mos Def into Hollywood’s favorite conscious-rap star” (City Pages).
In 2010, he played the Festa Dos Mundos festival with Africa Express in Spain in front of a 50,000 crowd and was part of the historic PUMA world cup showcase in Paris. His Music was also featured on the official Nike and Fader Magazine 2010 World Cup Podcast.
The Ghanaian MC is currently completing his official sophomore release, “Coming to America: Immigrant Chronicles,” and gearing it for a spring 2011 release.
———
Featured on this single is Eldee the Don who as always brings his versatility as a raper and a singer, look out for Eldee’s “Is it your money Vol. 2” in April 2011 and his album which will also be dropping this year. 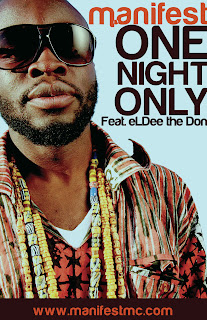